Netdata is distributed, real-time, performance and health monitoring for systems and applications. It is a highly optimized monitoring agent you install on all your systems and containers.

Netdata provides unparalleled insights, in real-time, of everything happening on the systems it runs (including web servers, databases, applications), using highly interactive web dashboards. It can run autonomously, without any third party components, or it can be integrated to existing monitoring tool chains (Prometheus, Graphite, OpenTSDB, Kafka, Grafana, etc).

Netdata is fast and efficient, designed to permanently run on all systems (physical & virtual servers, containers, IoT devices), without disrupting their core function.

Netdata is free, open-source software and it currently runs on Linux, FreeBSD, and MacOS.

Netdata is not hosted by the CNCF but is the 3rd most starred open-source project in the Cloud Native Computing Foundation (CNCF) landscape.

People get addicted to Netdata.
Once you use it on your systems, there is no going back! You have been warned...

The following animated image, shows the top part of a typical Netdata dashboard.

A typical Netdata dashboard, in 1:1 timing. Charts can be panned by dragging them, zoomed in/out with SHIFT + mouse wheel, an area can be selected for zoom-in with SHIFT + mouse selection. Netdata is highly interactive and real-time, optimized to get the work done!

We have a few online demos to experience it live: https://www.netdata.cloud

We provide docker images for the most common architectures. These are statistics reported by docker hub:

When you install multiple Netdata, they are integrated into one distributed application, via a Netdata registry. This is a web browser feature and it allows us to count the number of unique users and unique Netdata servers installed. The following information comes from the global public Netdata registry we run:

To install Netdata from source on any Linux system (physical, virtual, container, IoT, edge) and keep it up to date with our nightly releases automatically, run the following:

To learn more about the pros and cons of using nightly vs. stable releases, see our notice about the two options.

The above command will:

To try Netdata in a docker container, run this:

For more information about running Netdata in docker, check the docker installation page.

From Netdata v1.12 and above, anonymous usage information is collected by default and sent to Google Analytics. To read more about the information collected and how to opt-out, check the anonymous statistics page.

Netdata has a quite different approach to monitoring.

Netdata is a monitoring agent you install on all your systems. It is:

All the above, are packaged together in a very flexible, extremely modular, distributed application.

This is how Netdata compares to other monitoring solutions:

It has been designed by SysAdmins, DevOps and Developers for troubleshooting performance problems, not just visualize metrics.

Binary distributions. To improve the security, speed and reliability of new Netdata installations, we are delivering our own, industry standard installation method, with binary package distributions. The RPM binaries for the most common OSs are already available on packagecloud and we’ll have the DEB ones available very soon. All distributions are considered in Beta and, as always, we depend on our amazing community for feedback on improvements.

Netdata now supports TLS encryption! You can secure the communication to the web server, the streaming connections from slaves to the master and the connection to an openTSDB backend.

As always, we’ve introduced new collectors, 5 of them this time:

Finally, the DB Engine introduced in v1.15.0 now uses much less memory and is more robust than before.

We are very happy and proud to be able to include two major improvements in this release: The aggregated node view and the new database engine.

The No. 1 request from our community has been a better way to view and manage their Netdata installations, via an aggregated view. The node menu with the simple list of hosts on the agent UI just didn't do it for people with hundreds, or thousands of instances. This release introduces the node view, which uses the power of Netdata Cloud to deliver powerful views of a Netdata-based monitoring infrastructure. You can read more about Netdata Cloud and the future of Netdata here.

Historically, Netdata has required a lot of memory for long-term metrics storage. To mitigate this we've been building a new DB engine for several months and will continue improving until it can become the default memory mode for new Netdata installations. The version included in release v1.15.0 already permits longer-term storage of compressed data and we'll continue reducing the required memory in following releases.

We continued improving the Kubernetes helmchart with liveness probes for slaves, persistence options, a fix for a Cannot allocate memory issue and easy configuration for the kubelet, kube-proxy and coredns collectors.

Finally, we built a process to quickly replace any problematic nightly builds and added more automated CI tests to prevent such builds from being published in the first place.

The release introduces major additions to Kubernetes monitoring, with tens of new charts for Kubelet, kube-proxy and coredns metrics, as well as significant improvements to the Netdata helm chart.

Netdata has taken the first step into the world of Kubernetes, with a beta version of a Helm chart for deployment to a k8s cluster and proper naming of the cgroup containers. We have big plans for Kubernetes, so stay tuned!

A major refactoring of the python.d plugin has resulted in a dramatic decrease of the required memory, making Netdata even more resource efficient.

The main motivation behind a new patch release is the introduction of a stable release channel. A "stable" installation and update channel was always on our roadmap, but it became a necessity when we realized that our users in China could not use the nightly releases published on Google Cloud. The "stable" channel is based on our official GitHub releases and uses assets hosted on GitHub.

We are also introducing a new Oracle DB collector module, implemented in Python.

Netdata now has its own github organization netdata, so all github URLs are now netdata/netdata. The old github URLs, repo clones, forks, etc redirect automatically to the new repo.

Netdata is a highly efficient, highly modular, metrics management engine. Its lockless design makes it ideal for concurrent operations on the metrics. 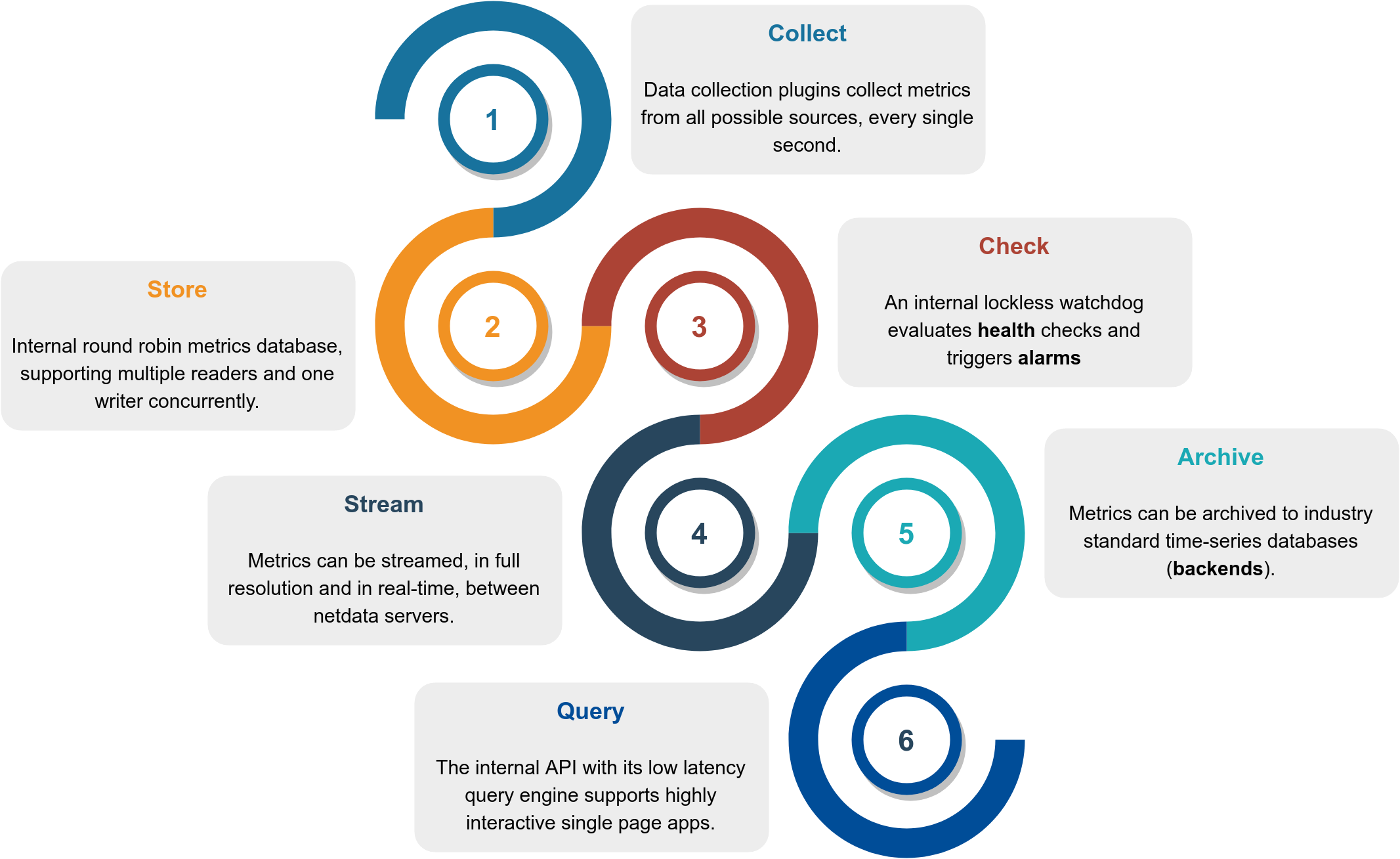 This is how it works:

The result is a highly efficient, low latency system, supporting multiple readers and one writer on each metric.

This is a high level overview of Netdata feature set and architecture. Click it to to interact with it (it has direct links to documentation). 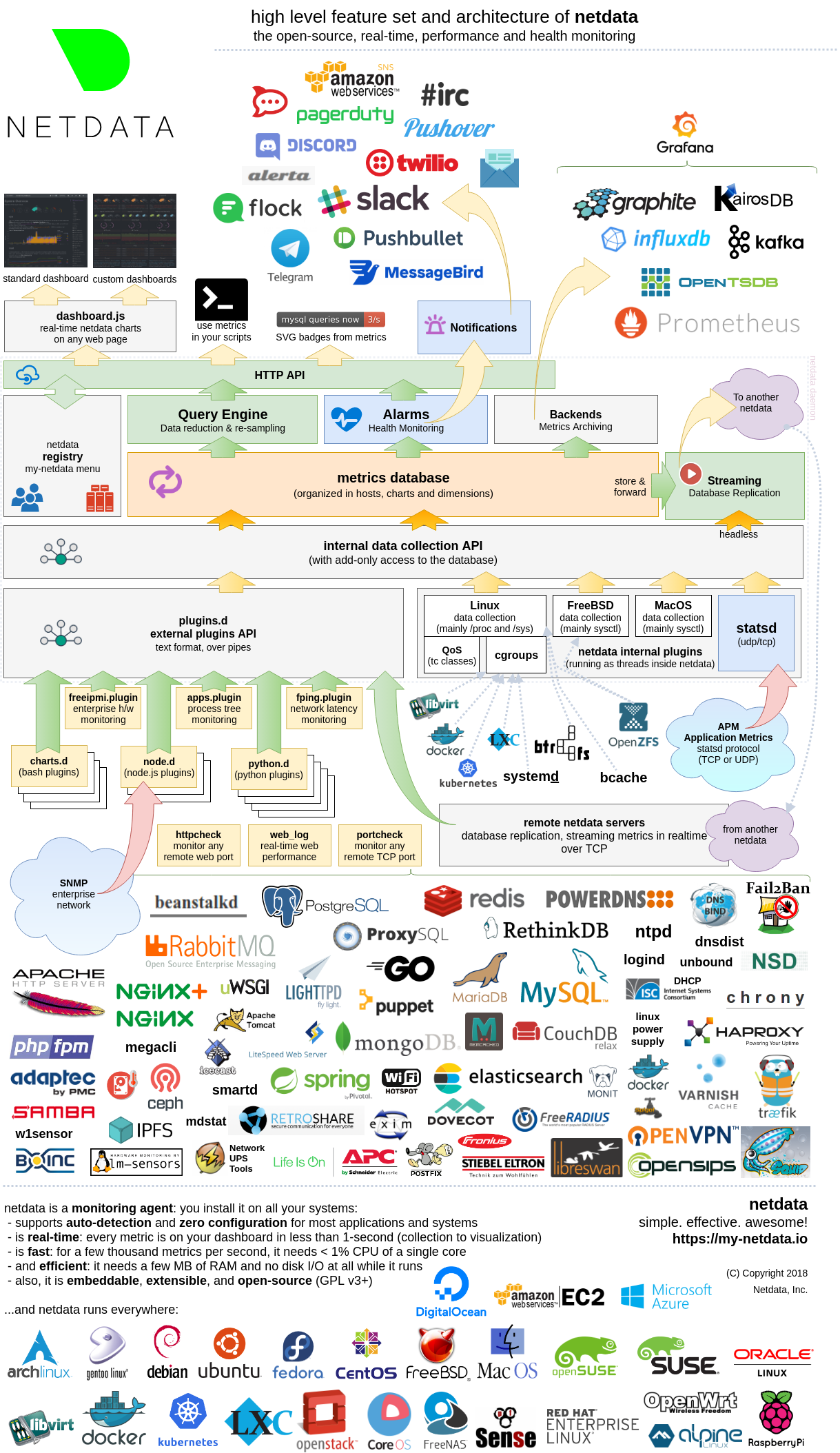 This is what you should expect from Netdata:

Netdata charts showing the bandwidth and packets of a network interface. received is positive and sent is negative.

Netdata charts automatically zoom vertically, to visualize the variation of each metric within the visible time-frame.

A zero based stacked chart, automatically switches to an auto-scaled area chart when a single dimension is selected.

Charts on Netdata dashboards are synchronized to each other. There is no master chart. Any chart can be panned or zoomed at any time, and all other charts will follow.

Charts are panned by dragging them with the mouse. Charts can be zoomed in/out withSHIFT + mouse wheel while the mouse pointer is over a chart.

To improve visual anomaly detection across charts, the user can highlight a time-frame (by pressing ALT + mouse selection) on all charts.

A highlighted time-frame can be given by pressing ALT + mouse selection on any chart. Netdata will highlight the same range on all charts.

What does it monitor

Netdata data collection is extensible - you can monitor anything you can get a metric for. Its Plugin API supports all programing languages (anything can be a Netdata plugin, BASH, python, perl, node.js, java, Go, ruby, etc).

You can easily extend Netdata, by writing plugins that collect data from any source, using any computer language.

The Netdata documentation is at https://docs.netdata.cloud. But you can also find it inside the repo, so by just navigating the repo on github you can find all the documentation.

You can also check all the other directories. Most of them have plenty of documentation.

We welcome contributions. So, feel free to join the team.

To report bugs, or get help, use GitHub Issues.

You can also find Netdata on:

Is it any good?

When people first hear about a new product, they frequently ask if it is any good. A Hacker News user remarked:

Note to self: Starting immediately, all raganwald projects will have a “Is it any good?” section in the readme, and the answer shall be “yes.".

Report success
We will send you the feedback within 2 working days through the letter!
Please fill in the reason for the report carefully. Provide as detailed a description as possible.
Please select a report type
Cancel
Send
Real-time performance monitoring, done right! https://my-netdata.io/ spread retract
/rjbian/netdata
C
GPL-3.0
Use GPL-3.0
Cancel
No release